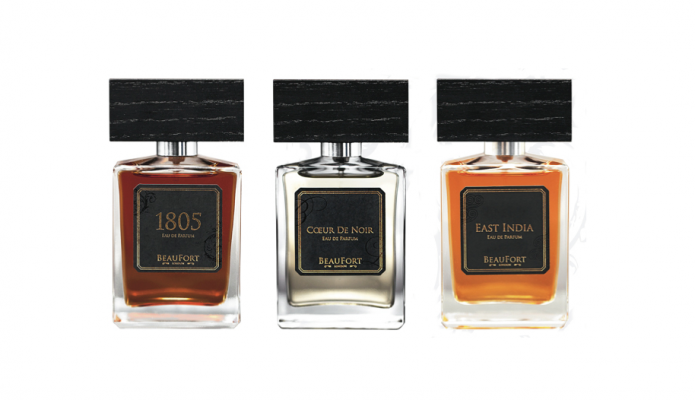 ‘Seafaring scents at their finest’

Here at The Grooming Guide we are an unashamedly British institution, so we’re always happy to spy fellow British vessels on the high tides of male fragrance. If you haven’t got my hackneyed metaphor by now, BeauFort London’s ‘Hell or High Water’ collection is a nautically inspired three-piece that takes its notes from Britain’s sea-faring past.

‘1805’, named after the year of Nelson’s victory and death at Trafalgar, appropriately comes in a fantastically blood-red hue perfectly framed in a crystal clear bottle. On first sniff, you’re greeted by top notes of smoky gunpowder that are subtly complemented by Cedarwood and Fir Balsam in the scent’s base. At this stage, you could be forgiven for thinking that the fragrance is woodenly one-dimensional. However, penetrating accords of citrus, evocative of sea spray, ensure that the fragrance isn’t lost in heady heritage.

BeauFort London’s next offering, ‘Cœur de Noir’ (heart of black) brings you off the deck and into the captain’s study. Rather aptly, it’s particularly strong on the heart notes of paper, leather and vanilla and it’s in this fragrance that the strength of the collection really shows. It’s said that the sense of smell is the most powerful in causing memory recollection and Cœur de Noir is particularly evocative. Even if the closest thing you’ve come to chartering a ship is a go on the pedalos at Hyde Park where you cried the whole time because Dad wouldn’t buy you a twister. I haven’t forgotten that, Dad.

The triptych is rounded off with BeauFort’s ‘East India’ that draws inspiration from Britain’s questionable colonial past. Using imported and exported goods of the British East India Company as its departure point; you can expect spices such as Cardamom and Black Pepper rubbing shoulders with Tobacco and Whisky. It really is a tour de force of all things British with slight hints of the orient in the form of Incense and Oud. Out of the three, this is the most intense and potentially divisive but it’s also the most exciting. Not for the faint hearted.